Creating a Telegram Bot with Python

Hey! This is a step-by-step guide on creating a Telegram Bot in a couple minutes!

This tutorial will be using the python-telegram-bot wrapper and Heroku to host it 24/7.

If you are already familiar with Python 3 and its virtualenv, simply create a venv, install python-telegram-bot via pip, do pip freeze > requirements.txt, and skip to section 1.

Before you start, be sure to have python3 and its package installer pip ready to go in whatever platform you are using. If for some reason you don’t have Python 3 on your system, install it via your distro’s package manager or, if on Windows, via the official website.

Depending on your setup, Python 3 might be simply called py or python, and the package installer might be pip3, so be sure to adjust the commands accordingly.

Create a directory for your bot and enter it:

Inside your directory, create a Python 3 virtual environment. Here, I will be calling it simply venv:

While inside it, install python-telegram-bot via pip:

Save a list of your newly installed packages in a text file called requirements.txt:

You are all set!

1. Creating and naming your bot

Your Telegram API access is granted by @BotFather. Talk to him via Telegram and try using /newbot. You will choose a display name and a @username (that ends with bot).

After naming your creation, you will receive your HTTP API token, and that’s what you will need to control the bot. Store it safely, as it can be used by malicious people to tamper with it.

You may also want to try /setdescription (Text shown when starting a chat), /setabouttext (Profile description) and /setuserpic (Upload image with compression), along with many other commands BotFather has to offer.

Here’s some boilerplate code for you to start building on. Create a main.py file and paste the content below in it:

Make sure to add your API token in the TOKEN variable on line 4!

To start your bot, enter your virtual environment (if not already in it) and run your file:

If everything went well, you shall see the message === Bot running! ===. Congrats! Try talking to him via Telegram. Send /start and it should answer hello, world!. To shut it down, press CTRL+C and wait for it to exit properly.

If you want to exit from the current virtual environment, simply run deactivate.

3. Making it your own

To add your own commands, three simple steps are needed. As an example, let’s create a /random command, that returns a random number.

Start by sending /setcommands to @BotFather, selecting your bot and sending him a list of all commands it should respond to, as well as their description. Be sure to send all commands and their descriptions, not only the one you’re adding! As it’s our bot’s first command (apart from /start, which doesn’t need to be listed here), our message should contain only one line:

I also recommend saving the list of commands and descriptions in a text file called something like BotFather_setcommands.txt, for reference.

Then, in your main.py file, create a new function for the command, with update and context as arguments:

After restarting, the bot should now be responding to /random!

For advanced API features and more detailed instructions, do check out the Telegram Bot API docs and the python-telegram-bot docs.

Having to leave your terminal window open and your computer powered on for your bot to be working can’t be the best option, right? Well, if you already know your way through VPS, cloud providers and the like, then just leave it running on your preferred platform. Otherwise, keep on reading.

To leave your chatbot running (almost) all the time, this tutorial will be using Heroku, a cloud platform as a service (PaaS) that has a free tier for small personal projects, which should handle a simple bot just fine. It also has a large list of add-ons for databases, logging, testing, and much more. Alongside it, you will also need git for a quick and easy deployment method.

Before we start, be sure to install the Heroku CLI as well as git itself, via your distro’s package manager or, if on Windows, via the official website.

Let’s get on it! First, create a free Heroku account: 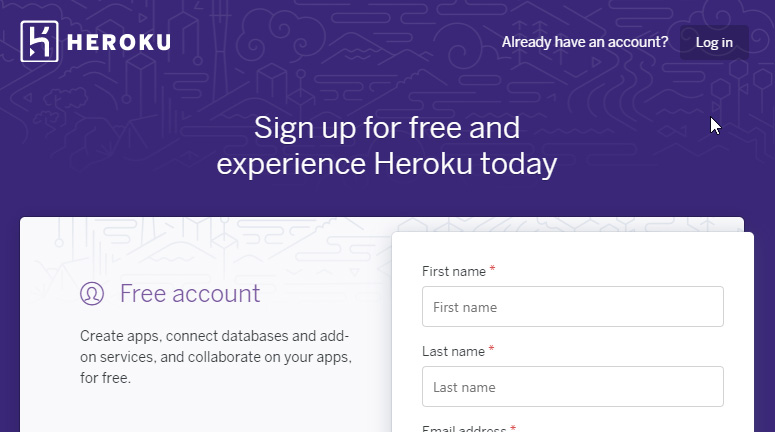 Then, create a new app and give it whatever name you feel like.

Now that your app is created, you need to tell Heroku how to start it. For that, in your bot folder alongside your other files, create a blank file named Procfile, with no file extension. It should contain only the line worker: python main.py. Alternatively, simply run:

Also, let’s have git ignore our venv folder, as Heroku will later recreate it for us via the file requirements.txt created back in section 0. Same idea as before: blank file named .gitignore, containing venv/. Or, simply:

Log in to your account using heroku login and following the messages. Then, initialize a git repository in your bot folder and link it to your Heroku app, replacing bot-tutorial with your Heroku app name:

All that’s left is to turn your bot on. In the Resources tab, click the edit button, flip the switch and confirm:

Your bot should now be working! Try sending it a command via Telegram! To check your console logs, go on More > View logs:

To deploy any additions or changes, commit them via git and push. Be sure to add a commit message describing what changed:

And you should be all set! Thanks for following along, and I hope you enjoy your new creation!